A new study by one of the nation’s top research universities shows that – with Merlyn at their side – teachers have the time, energy, and attention to help each of their students succeed. 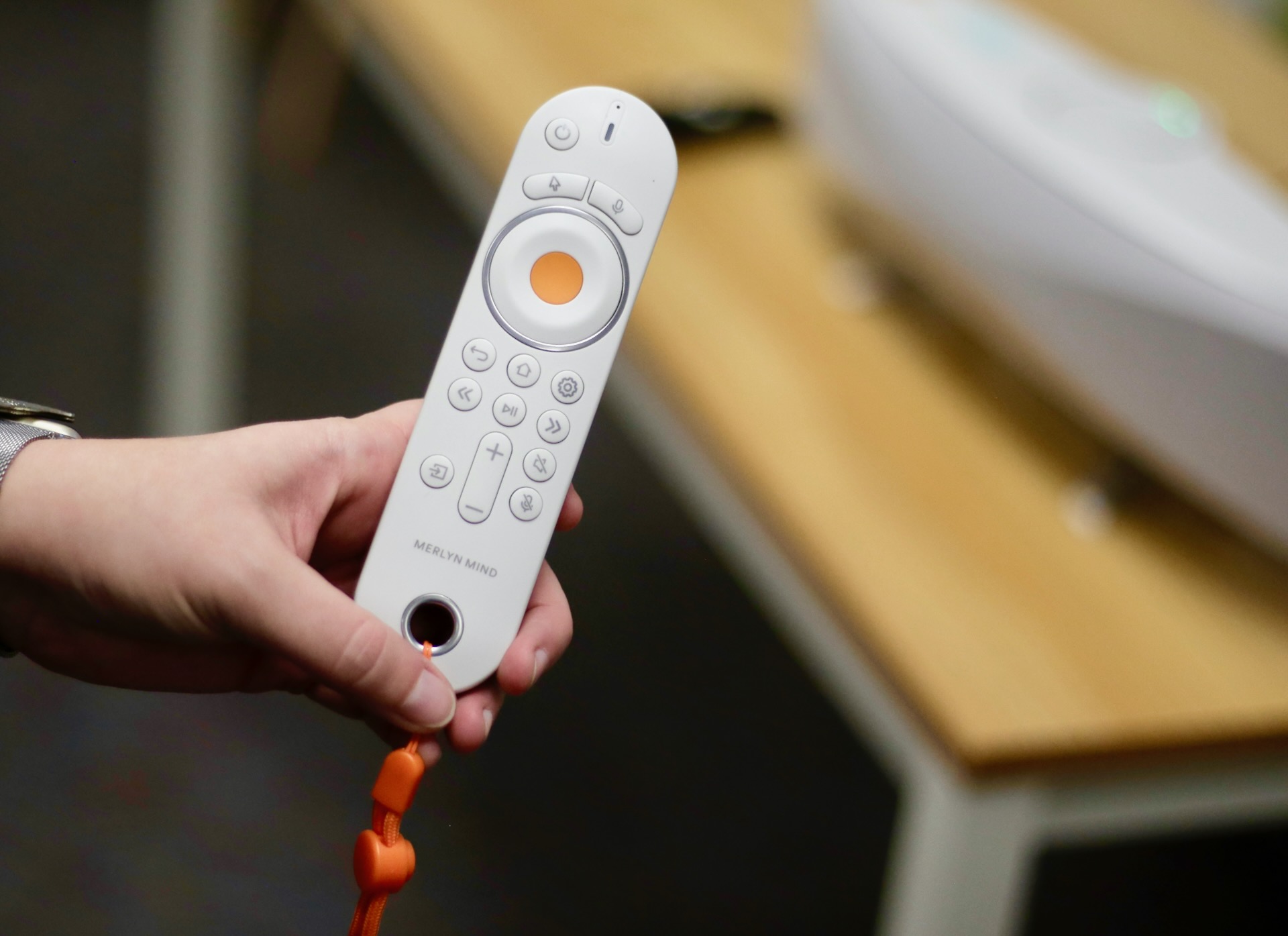 What if you had a tool that in a matter of weeks could reduce work-related stress by almost 15%?

And what if that same tool could streamline repetitive administrative tasks and give you valuable time back to focus on the things that matter most?

A new study by one of the nation’s top research universities shows that for teachers, that win-win scenario is a reality with Merlyn Mind’s AI-powered Symphony Classroom.

“Since the beginning, one of the fundamental beliefs at Merlyn Mind is that teachers are amazing,” says Merlyn Mind Chief Strategy Officer Levi Belnap. “And if we can leverage artificial intelligence to get administrative tasks and technology management and all this other stuff out of their way, they’ll have more time, energy, and attention to help each of their students succeed. We’ve always believed that on a gut level, and this third-party research validates our belief and confirms that Merlyn is an incredibly valuable classroom tool.”

Satya Nitta, Co-founder and CEO of Merlyn Mind, understands the limits and opportunities of using AI to support teaching and learning.

“Being a teacher is difficult today for so many reasons," says Nitta. "Many of these reasons are big societal problems we must address together with public policy. At Merlyn Mind, we’re focused on what we can do now to help teachers. We’re applying the thrilling advances in artificial intelligence to education to make work better for teachers today. We’re encouraged by the results of this research and the positive impact of our technology on teaching and learning.”

The research project kicked off more than two years ago and was led by University of California, Irvine’s Creativity Labs in partnership with the nonprofit Digital Promise.

At two sites – one in southern California and one in rural North Carolina – the University of California, Irvine (UCI) researchers collected quantitative and qualitative data from both a treatment group and control group of elementary, middle, and high school teachers. The research included baseline pre-interviews, classroom observations, system usability surveys, and pre- and post-implementation surveys on technostress and time.

A high-stakes third-party research project like this one is rare in the edtech industry.

“Most edtech companies never work with third-party researchers,” says Dr. Kylie Peppler, Director of The Creativity Labs and professor of informatics and education at UCI. “I would say probably less than 1% of the industry actually partners with researchers.”

The first big question we wanted to answer was this: Can an AI-powered digital assistant help reduce technostress in the classroom?

In our hyper-connected world, very few of us are immune to technostress. All of the tech tools – email, video-conferencing, cell phones, social media, apps, and calendars – that we use to manage our work and home lives are constantly demanding our attention. Even in the best of times, they can cause anxiety, exhaustion, and fatigue.

For teachers, the pandemic heaped on even more technostress as additional technology was introduced to cope with the new normal of school closures, quarantines, absenteeism, distance learning, and staff shortages.

“Technostress is very common,” says Peppler. “When that environment is not going well, all of the sudden that can be a really stressful part of our everyday job. You get a lot of people resisting technologies and also being technophobic, particularly in schools.”

The UCI research found that 61% of teachers who used Merlyn reported an overall reduction of technology-related stress after just seven weeks.

“Because we happen to be implementing during perhaps the largest increase in tech use in education in our history, the teachers that I saw were facilitating synchronous learning with half of their students on Zoom and half of their students in person,” says Dr. Emily Schindler, Assistant Director of UCI’s Creativity Labs. “If you can just reflect on every meeting you had during the pandemic over Zoom and how many times somebody was muted, somebody didn’t have their camera on, or somebody’s link wasn’t showing up properly, imagine that happening with 30 fourth-graders and trying to troubleshoot that. The stress levels were really, really high.”

But thanks to Merlyn, technostress was reduced by an average of 14%. On top of the reduction in technostress, the researchers found that Symphony Classroom teachers felt significantly less afraid of being replaced by new technologies.

“That’s huge,” says Belnap. “At Merlyn Mind, we saw an opportunity for AI to augment human strengths, not replace them. Computers can’t empathize and connect with students the way teachers can. But what the best technology can do is empower teachers to focus more time and energy on those all-important human connections. We’re thrilled that teachers who have experience with Merlyn recognize that.”

The second big question we wanted to answer centered around time: Can Merlyn help teachers save time? And if so, what could they do with that time?

In the early stages of Merlyn’s development, we spent a lot of time observing teachers and asking them how AI could help in the classroom. Would a new math app be helpful? Maybe a reading app? Or quiz software powered by AI?

But what we discovered was something different altogether.

We saw teachers spending a lot of time going back and forth to their computers. They were accessing their already deep mix of apps. They were switching ports. They were playing videos, rolling carts around the room, and advancing presentations.

And every moment they spent manipulating technology was time stolen from teaching.

“We talked to those teachers,” says Belnap, “and they said, ‘Don’t give me another app. I have so many good apps. Just help me with the stuff I already have.’”

If we could automate those workflows, we thought, teachers could spend more of their time and energy where it belongs: on students.

So that’s what we did, and according to UCI’s research, it’s working.

According to the research, “Users resoundingly report a reduction in steps to accomplish embedded tasks, like switching between a document camera and their laptop, without having to walk back to their computer or press any keys.”

“[Symphony Classroom] is great,” said one teacher involved in the research. “We need it. Anything that takes away even two, three minutes of going and opening [applications] by hand for us, and instead to just speak to the machine … it's helpful.”

With that newfound time, there’s an opportunity to shift toward more student-centered learning.

“We talk about professional development a lot, and oftentimes it comes down to leaving the desk, leaving the sage-on-the-stage model, and becoming the guide on the side,” says Dr. Peppler. “But if your technology does not support that movement, you're arrested to the front of the room and you're leaving those kids in the back of the room to their own devices, and to feel like they're not really invited into the classroom community and to be off-task.

“Merlyn allows teachers to use the full space of the classroom and to move around,” Dr. Peppler continues. “And that, for the project-based learning, for the kind of things that we know about high-quality teaching and learning, that's a huge freedom that’s afforded. We can’t underscore that enough.”

Merlyn works across the spectrum of education

On top of the stress reduction and time savings, Symphony Classroom proved effective across all grades and all subjects. Additionally, different teachers – from eager tech adopters to those who are tech-averse – found Merlyn and Symphony Classroom to be helpful.

“We saw that in the research,” says Belnap. “We looked across K-12, across subjects, and the findings were similar. You’re saving time. You’re decreasing stress. It doesn’t matter what you’re teaching or how old your students are, this is helpful.”

Dr. Peppler agreed, and she predicts that Merlyn will prove to be a powerful tool for keeping teachers in the profession.

“We saw teachers as happy in the art classroom as they were in the science classroom. In kindergarten as well as sixth-grade,” she says. "I could guess that in about a year you're going to see the teachers who have this technology remaining in the field. We're seeing a huge loss and turnover of teachers right now. It's very hard to retain them. And having an AI assistant that is doing the things that you want done in the classroom I think is going to be hugely helpful."

'Merlyn is something you can use all day, every day'

Interestingly, Dr. Schindler reported discovering teachers who had covertly brought a voice assistant from home into their classroom. While teachers wanted to use these devices, they aren’t designed specifically for the needs of the classroom. They also keep recordings of almost everything they hear.

“There's a lot of fear and well-placed concern around bringing AI into the classroom,” she says. “And so the fact that your business model does not sell data was a huge, huge selling point for those participants.”

And once they got their hands on Merlyn, teachers didn’t want to let go. Across the board, they recommended it to other teachers.

“I think it’s the best piece of instructional technology we’ve ever been given,” says one North Carolina elementary school teacher. “It’s rare that you get something in your classroom that’s not just for data collection or to look good. Merlyn is something you can use all day, every day.”

Dr. Peppler admitted to being surprised by the overwhelmingly strong results of the research. “Don’t take this lightly,” she says. “It is very rare to find this much happening this early in the game.

“Thank you for making this audacious idea a reality.”

Read the full Merlyn Mind research report from UCI. And listen to the podcast with Drs. Peppler and Schindler here.

To find out how our digital assistant can reduce tech-related stress and save time in your district, visit go.merlyn.org/caldwell.